A year ago on crude oil strongly fell, it was down almost for 50% for the last 12 months. As everything changed a year later as crude oil now more than 50% of minima of 2016?
Crude oil going into a positive season of year, with average coefficient of strengthening of 10% within the next 6 months now. Whether it will continue to press above how it was last 12 months? Whether it will move above, because of seasonal force? See on crude oil for the last 30 years below. 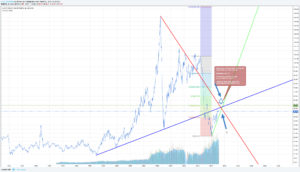 Decrease a year ago, lower than the level of support took crude oil and the rally within last year began, now it tests a reverse side of this 30-year ascending channel in (1).
This is a triple test taking place at this time, that if taken out, would be VERY bullish Crude.
Growth of support undergoes testing around (2). The risk on trade in crude oil, wouldn’t like to see weakening of support in (2).
At this time dealers are very sure that Crude oil prices will raise, reflecting levels of credibility, similar there where they sustained the middle 2014, directly before big decrease began. With the Crude oil reflecting the most crowded trade in its history it is important that support kept in (2).